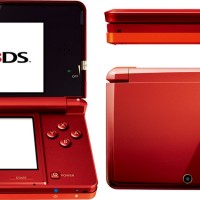 Yesterday marked a very important day for Nintendo fans. During the Nintendo 3DS press conference, it was revealed that the upcoming hand held would be released on February 26th, 2011 in Japan and in March 2011 for North America. The Japanese Nintendo 3DS will retail for ¥25,000, which converts to about $300 in North America (this is just an estimate, as there was no official North American price given).

Final specifications were also revealed, including an SD card that can hold 2 GBs worth of data. While in sleep mode, the 3DS will still be able to communicate and will actively seek out the Nintendo Zone, information, free games and other data to download. It will also exchange data with other 3DS systems even if you don’t have a game in the cartridge slot. Interestingly, you can create Miis instantly with the built-in camera. Taking a picture of a friend or relative will automatically create a Mii of their likeness on the 3DS. You can then customize the Mii afterward.

Parents are given more control over what their children are playing with new parental controls that are set based off the game’s ratings. The browser can also be restricted so that your child isn’t given free roam of the internet if you don’t want them to. In addition to downloading games easily, you will be given the ability to check out introductory videos and rankings. The 3DS is fully backwards compatible with the DSi and original DS games, and upon release will be available in Cosmo Black and Aqua Blue.